Joanna Trafas is a soprano born in Krakow. She graduated with distinction from the Krakow Academy of Music in 2008 (Master of Music – Dept. of Vocal and Dramatic Arts) where she studied with Zofia Kilanowicz and Izabella Jasińska-Buszewicz. She also holds a Masters degree in Musicology from the Jagiellonian University (2006). She made her stage debut in 2005 playing the role of Eliza Doolittle in „My Fair Lady” (Capitol Musical Theatre, Wrocław, 2005).

Her musicological interests and flexible vocal technique allow her to perform a very broad repertoire representing many styles and genres spanning  eight centuries.

or  visit Joanna’s fan page to keep up

She holds prizes from such competitions as the Iwona Borowicka Operetta and Musical Theatre Singing Competition in Krakow (both in 2004 and 2010), as well as the Kiwanis Solo Vocal Scholarship Competition (US, 1997) and the Karol Kurpinski Aria and Song Competition in Włoszakowice (1999). She  is a recipient of the City of Krakow Creative Scholarship Award for the year 2007.

She participated in many vocal workshops and master classes, led by Professor Marcin Habela (2006-2012), but also seeking to broaden her horizons with such excellent teachers as Jerzy Artysz, Christian Elssner, Ryszard Karczykowski, Helena Łazarska as well as Dean Kaelin, Jeffrey Skousen and John Henny (International Voice Teachers of Mix, Speech Level Singing). She participated in the Young Talents Program at the Warsaw Grand Theatre – the National Opera where she’s taken classes with the Polish Soprano Izabella Kłosińska and famous coach Dale Fundling.

She is a cooperating artist at the Podlasie Opera and Philharmonic – European Centre for the Arts in Białystok ( Phantom of the Opera) , Gliwice Music Theatre (A night in Venice), Laznia Nowa Theatre in Krakow (Vengeance is a Woman or The 47 Ronin) and performs with the Krakow Philharmonic (Wagner’s Parsifal conducted by G. Chmura, music by Johann Strauss II) , performing recitals there and directing semi-staged concerts like Smak Magii (A taste of magic) and American Dream  as well as working as a speaker for the Philharmonic’s Education Department. Since 2003 she appears as guest singer with  Floripari early music ensemble, performing mostly renaissance music both in Poland and abroad. She sings with the Tatra Climate Chamber Orchestra of Zakopane, the virtuoso harpist Malwina Lipiec (as Silver Duo) and in duo projects with Justyna Dolot on the virginal  (as erminea ), Cyprian Jagiełło (organist) and Emilia Bernacka (on piano).  She performed in Italy, Scotland, Lithuania, Ukraine, Russia, Belgium and the Netherlands.

She’s made guest appearances at concerts organized by the Krakow Opera (“Night of the Theatres”, impresario stage, Opera Summer at the Krakow Barbican) and Taberna Libra Art Event Group. Always seeking variety, as a teenager living in Santa Monica, California she played clarinet in her high school’s marching band. She’s performed at Loch Camelot, one of Krakow’s literary cabarets as well as participated in the jazz section of the FAMA Festival in Swinoujscie (2001).

Stage credits include opera, operetta, musicals and theatre: the aforementioned Eliza Doolittle (performed until 2007), the leading role of Daisy in Walder Raźniak’s and Karol Nepelski’s student musical “The Vampire” (Ludwik Solski State School of Drama, 2004-2005), Maria in “West Side Story” (Teatr Rozrywki, Chorzów, 2006-2009), Belinda and 1st Witch in “Dido and Aeneas”  Amore in Gluck’s “Orfeo ed Euridice” (Krakow Academy of Music in co-production with the Krakow Opera, 2007), as well as  Woman in Coat in Paweł Kamza’s adaptation of Sławomir Mrożek’s short story “Nocleg”  (“Accomodation”) for Krakow’s Łaźnia Nowa Theatre in 2010 and The Ghost in “Revenge is a Woman (the 47 Ronin)”. She has performed with Reinild Mees’ 20th Century Song Foundation (“The Unforgettable Songs of Leonard Bernstein” – Dilligentia Theater, The Hague, Amsterdam concert venues and Highlands live muziek & film festival, Ede), and at such Polish festivals as Chantarelle 2010, the Ogiński Festiwal, Cracovia Sacra, “A Musical Summer in Krakow”, and Internationale Bach Akademie Krakow 2006.

She has recorded film and theatre music by Aleksander Brzeziński and Adrian Konarski .

Her favorite composers are Bernstein and Mozart, though she usually falls in love with whatever music she’s currently working on.

She loves art museums, cooking and talking. She misses the ocean.

or  visit Joanna’s fan page to keep up 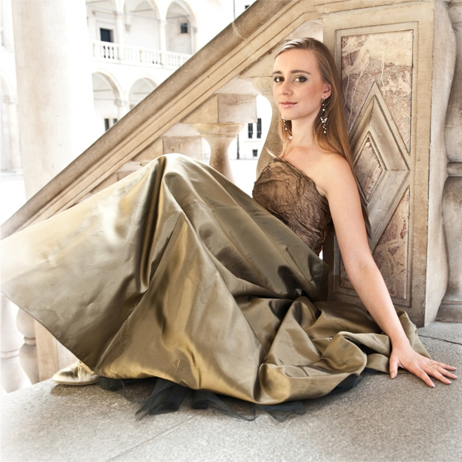